Players are being primed to put their poker faces on to join RealTime Gaming, Alderney eGambling and Continent8 at the Invitational Poker Freeroll, hosted by All-In Translations, at Pokerstars Live in Okada Casino, Manila, Philippines, on March 20. 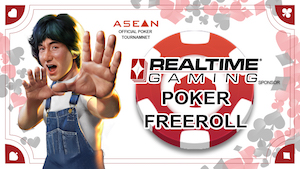 First prize is $800, provided by RTG, second prize is $500, courtesy of Alderney eGambling, and third prize is $300 from Continent8. The event is hosted by All-In Translations.

Prizes will be awarded as online vouchers for the e-commerce site of the winner’s choice. And this year, players who take out either of the RTG players will claim a $100.00 cash bounty.

RTG Asia’s CMO Alex Czajkowski and RTG Philippines director Claude Henoud have volunteered to play and pay whomever takes them out of the game.